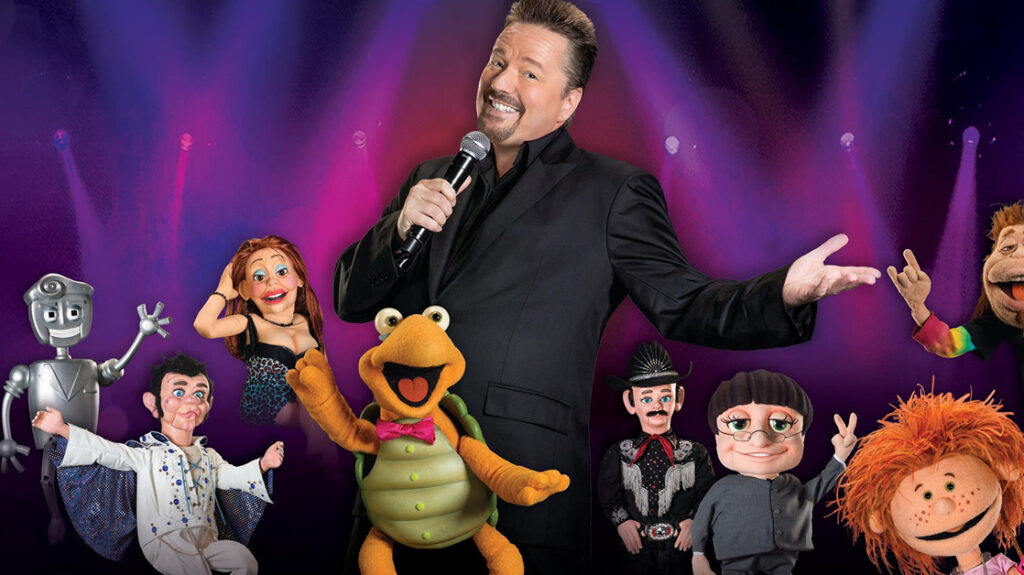 It’s a Vegas production, right here in central Iowa, where you’ll see some of your most beloved celebrities come back to life and current day musicians share their favorite songs. Terry Fator, superstar ventriloquist, impressionist, singer, and comedian, is bringing his wildly popular show, “It Starts Tonight,” to Prairie Meadows Casino, Racetrack, and Hotel on September 18 at 8pm.

Terry Fator’s rise to superstardom was not like a rocket speeding into space, but more like a bus ride across the country – slow and methodical. Fator grew up in the small town of Corsicana, Texas where, at the age of 10, he stumbled upon a book at the library about ventriloquism. That’s where the dream started. Fator spent two decades on the road performing at county fairs, kids’ birthday parties, and numerous small venues perfecting his craft. Though Fator’s ventriloquy was evolving and becoming more polished, he was finding little success as a solo entertainer. The entertainment dream nearly died for Fator. After much encouragement from his family, Terry got the break he had been working toward – a chance to audition for America’s Got Talent in 2007. “It was the big break I had worked for my entire life,” Fator said.

His chance to perform for a panel of skeptical judges and millions of viewers was just the boost his career needed. Fator blew away the judges with his first performance – an impersonation of Etta James’ iconic tune At Last being belted out by his puppet, Emma Taylor, the forever 12-year-old with a big voice. Fator, himself, was skeptical about his chances to win America’s Got Talent. “I was totally not expecting to win it,” Fator said. “I thought Winston (Fator’s turtle puppet) and I would get on two to three episodes, and I was okay with that.” Fator went on to win season two of America’s Got Talent, the $1 million prize, and the hearts of millions of new fans.

After Fator’s win, he signed a contract to perform at the Las Vegas Hilton. His three-show-a-month contract was lucrative for the Hilton as Fator was consistently performing to sellout crowds. “My dream since I was 15 was to be a Vegas entertainer,” Fator shared. “While I was performing at the Hilton, people from The Mirage came out and saw me and it literally changed my life.” The Mirage Hotel & Casino offered and signed Fator to a five-year $100 million contract for him to perform nightly in his very own theater – Terry Fator Theatre. This deal was deemed one of the largest entertainment deals in Las Vegas history.

Fator has performed for more than a decade at The Mirage. In that time, he has garnered many awards including Las Vegas’s best show, best impressionist, best all-around performer, best family show, and best overall show. His accomplishments also include a consistent rank in the top three on Forbes’ list of top-earning comics, coming in just behind comedic legend Jerry Seinfeld.

Terry’s Las Vegas entertainment adventures are continuing to evolve. After his record-breaking residency at The Mirage, he is now on stage nightly at New York, New York Hotel and Casino performing an all-new show “Who’s the Dummy Now?”

What sets Fator apart from other entertainers is his dedication to his fans. He shows this through developing a variety of performances. Fator’s tour show, Christmas show, and Las Vegas show are completely different from each other. And he revamps his Vegas show nearly every 18 months so his fans can see him perform many times and enjoy a new production with new songs, puppets, and comedy each time.

When you see Terry Fator perform you can expect to hear songs and comedy from celebrities that have passed on like Elvis, Dean Martin, Etta James, Karen Carpenter, and Louis Armstrong, along with current entertainers like Garth Brooks, Elton John, Bruno Mars, Meghan Trainor, and Justin Timberlake. And Fator travels with his own cast of characters. You’ll get to meet Winston the Impersonating Turtle, Maynard Thompkins the World’s Greatest Elvis Impersonator, Walter T. Airdale the Country Singer, and Duggie Scott Walker the annoying neighbor, among many others. Fator can impersonate more than 200 voices combining that skill with ventriloquism, singing, and comedy to bring fans a unique and laughter filled experience. “I just always want to entertain. That’s it. Now that I have fans, I just want to keep them smiling and laughing,” explains Fator.

Now is your chance to see Terry Fator perform LIVE at Prairie Meadows on September 18 at 8pm. Tickets are limited. To see this award-winning Las Vegas headliner, visit prairiemeadows.com.