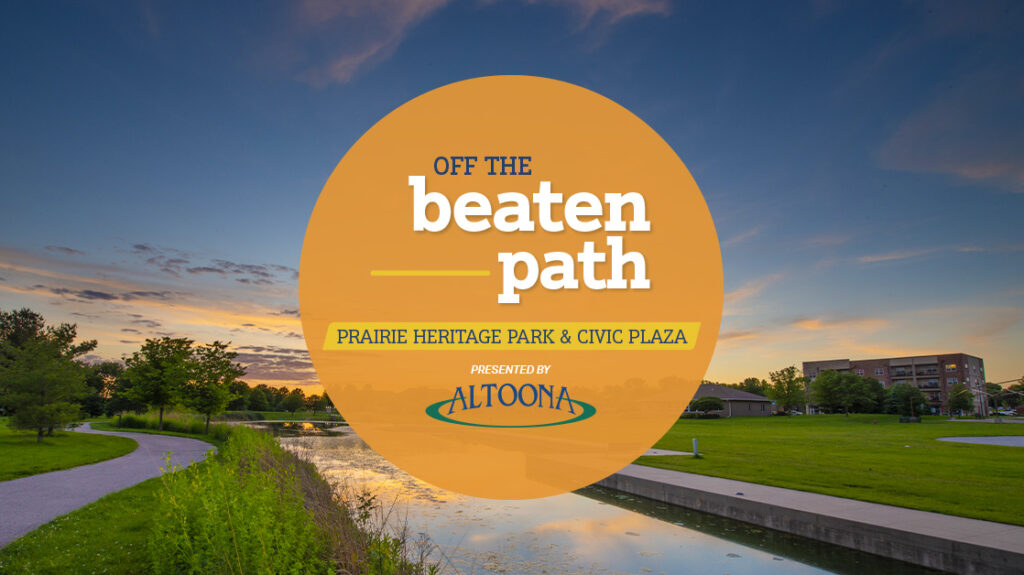 There’s a scene in The Lion, The Witch and The Wardrobe in which Lucy, the young heroine, steps into the eponymous wardrobe and is instantly whisked away to Narnia, a faraway land where magic is real, animals talk, and everyone is really into something called Turkish Delight.

The animals of Altoona’s Prairie Heritage Park do not, to our knowledge, speak any human languages. But, besides that, the park is pretty much the Narnia of Altoona.

Tucked away beside the bustling 8th Street Corridor—a district known for its shopping and dining—Prairie Heritage Park is an oasis of calm and serenity at the center of an otherwise bustling town. Stepping into the park, you feel like you’ve escaped to a whole new world, even though you’re only a block away.

The park features a restored wetland, home to a diverse ecosystem of plants and animals native to central Iowa. A walking path meanders along the water’s edge, taking visitors first to a war memorial, then the popular Enabling Garden—an accessible space where families can engage all five senses as they interact with artwork and plants—followed by a calming waterfall and a dock that extends over the water. Everyone who visits the park has a favorite spot along the trail; to exercise, to fish, to practice some early-morning yoga, or to do that rarest of things in the twenty-first century: just sit and think.

Finally, the trail arrives at the park’s main feature: The Civic Plaza. A spacious gathering place with a stage, a splashpad, a fountain and a sculpture, the Plaza hosts events such as “Music on the Plaza”—you can catch the final concerts on August 1st and August 29th; they’re free and family-friendly—as well as Relay for Life events, among others.

Take a quick tour of Prairie Heritage Park in the video below. Or, better yet, come out and experience it for yourself! It’s the perfect place to catch a breather when you’re visiting Altoona’s nearby shopping and entertainment destinations, and a popular spot for community events. And who knows? You might even bump into a friendly faun along the way.

What to know before you go