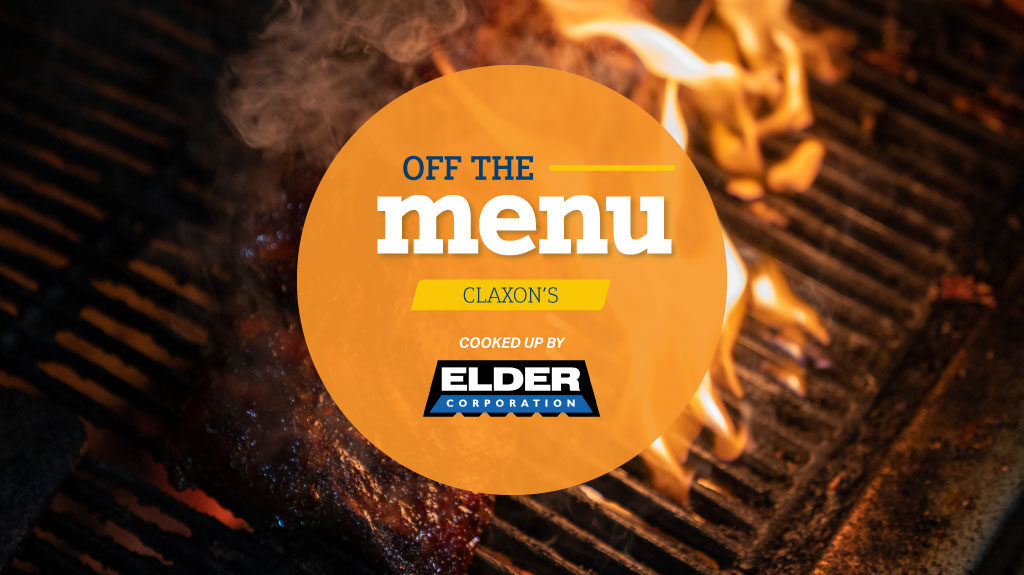 “Off the Menu” is an Altoona restaurant feature sponsored by Elder Corporation.

Claxon’s Smokehouse in Altoona is an old-school barbecue joint with a firetruck out front, an Oklahoma Joe’s® smoker out back, and an oakwood grill in the pit.

And while the restaurant itself is a sight to behold, the meat is the true star of the show.

We’re talkin’ seared, smoked, juicy, fresh, tender, Iowa-sourced, and served on a big plate with all the fixins. This is fall-off-the-bone barbecue at its best.

Andy, the owner-operator and pitmaster, takes pride that all the meat served at Claxon’s is so flavorful that it really doesn’t need sauce. (With that said, there is some seriously good house-made sauce here. Just please don’t ask for ketchup with your steak.)

Besides the meat, one of the best things about Claxon’s is that just about every dish comes with a story. Ask Andy, and he’ll tell you how certain flavors come straight out of Kansas City, or how his mother’s cooking inspired a favorite side. It’s one of those places that’s steeped in history, and every time you visit you learn something new.

The other day, we joined Elder Corporation, sponsor of Visit Altoona’s Off the Menu series, to try Andy’s famous barbecue and hear a few of his stories along the way.

In his own words, here’s what the pitmaster had to say.

Before we get to the meat, what’s with the fire truck?

Let’s start with the steak.

Andy: “Good idea. This is just a good old Iowa top sirloin steak, hand-cut and cooked on our oakwood grill. These come from Iowa Quality Meats up in Tama. The only thing on it is a little bit of our house-made seasoning, with a pinch of salt and pepper. We don’t put anything else on it. I think they taste great on their own.”

It has a mild smoky flavor.

Andy: “That would be from the oakwood grill. Unlike hickory or mesquite, oakwood gives meat a very light smoke flavor. It’s important not to overpower the flavor of the meat, just compliment it.”

This steak is perfectly charred on the outside and juicy on the inside. What’s your secret?

Andy: “It starts with the quality of the meat. But then it’s all about the timing and where the meat is on the grill at any given moment. It’s kind of like conducting music.

“The type of grill you have helps a lot, too. We have an Aztec oakwood fire grill. The grates are about 15 inches above the fire itself. There’s a hot spot at the center of the grill, a 10-inch circle, and then it gets cooler and cooler the further outside that circle you get. That’s one of the best ways to regulate the heat—to watch where the meat is relative to that circle. That’s how you get that nice bark on the outside without overcooking the inside.

“Also, right after you cook it, resting the meat helps retain the juices.”

Anyone ever ask for ketchup?

Andy: “If it’s cooked properly and you were raised right, you don’t need anything on your steak.”

Tell us about this big, beautiful burger.

Andy: “That would be our Buckaroo. It’s our bestselling burger, and it’s my kid’s favorite. This is an 8-ounce ground sirloin that we throw on the oakwood fire, so it gets that gritty wood-fire taste to it. Nice and smoky. Also, it has applewood smoked bacon, cheddar cheese, a little bit of our house-made barbecue sauce, and then fried onion straws on top.

“Our oakwood fire grill puts a nice sear on the burger, but it also locks the moisture inside, so it doesn’t get dry. That’s also why we make a thicker burger than most places.”

These burnt ends have a funky kick.

Andy: “I’m originally from Kansas City. This was a big treat they had down there. We serve it with parmesan toast and voodoo sauce, which is made from an orange marmalade with red cracked pepper. It’s sweet, but it does have a little bit of a kick to it.”

Andy: “We don’t serve anything that comes out of the kitchen with sauce on it. We just put it off to the side. I don’t think any of our meat necessarily needs sauce on it.

“We do have a couple different rubs. The one for our ribs has over 30 different herbs and spices. For the burnt ends, we drizzle a little bit of our liquified sugar rub over them, which adds some shine and a little more sweetness. Some people like BBQ sauce on their sandwiches. Our smoked turkey and smoked ham—a lot of people put sauce on those.

“Personally, I don’t think the brisket or the ribs need sauce at all.”

Andy: “We have our macaroni and white-cheddar cheese, cornbread, skillet green beans with garlic. We put our baked beans underneath the brisket as it cooks overnight, so you get that flavor. We take some of the bits of the brisket, as it cooks, and toss it in the beans.”

Does BBQ run in the family?

Andy: “There are a few recipes on the menu from family members. Our zucchini—that’s a recipe from my mother. It was the only way she could get me to eat my vegetables as a kid.”

Any final words of wisdom?

Andy: “If you’re going to order your steak well-done, just order a burger instead.”

Thank you to Elder Corporation for sponsoring Off the Menu, the visitor’s guide to Altoona’s deliciously different dining spots! Elder Corporation literally lays the groundwork for some of the biggest excavation projects in Iowa. You can learn more about Elder Corp here.